How Man Creates God in his Own Image

"In the beginning, man created god in his own image, in the image of man, created he him.  Father and Son, created he them."
(Genesis 1:27, "translated" by my seer stone).

If I were to quote this in a church meeting, or with any Christian, Muslim, or Jew, I might as well be (seer) stoned indeed, either literally, figuratively, or otherwise.

Such blasphemy. Or is it? 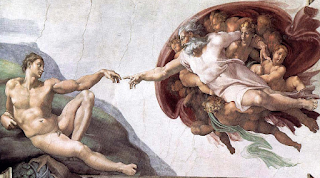 Does the idea really seem strange that mankind created a definition of god that looks suspiciously like what mankind thinks is a powerful being?  Mankind deferred to kings and despots, so the old testament definition of god is despotic.  Mankind saw that kings and despots conduct genocide, so their god condoned genocide, slavery, polygamy, and all sorts of pretty awful things.

Observe, for a moment, how in the LDS Church, we have a real person, Joseph Smith, who did a number of things, both good and bad.  Yet, when Mormons sing, "Praise to the Man", we have an image of Joseph Smith that hardly corresponds to the reality of the man.  He has become mythologized, to something beyond anything he actually was.  "Joseph Smith, the Prophet and Seer of the Lord, has done more, save Jesus only, for the salvation of men in this world, than any other man that ever lived in it."

Our LDS family and friends revere Thomas S. Monson as the Prophet, Seer and Revelator, and in recent weeks, the announcement that he is no longer actively involved in church leadership has been met with sadness for how much we will miss his leadership.  I'm sorry, but I don't see it: within months of him taking charge of the Church, he triggered the Proposition 8 campaign, and since then, has done nothing but pursue one ill-conceived political escapade against marriage equality after another.

Yet my point isn't to criticize either Joseph Smith or Thomas S. Monson.  The reality is that they are human, no more and no less, yet in our culture, we make them more than they really are.

Is it so surprising, then, that we would create god in our own image?

Let's suggest a hypothesis: there is a god.  How would we know this?  How could we be sure that whatever we think is god, who revealed himself to ancient prophets who then attempted to kill their son, or conduct genocide, or who called for the sun to stop moving around the earth so that the israelites could slaughter their enemies -- all that -- how would we know that this "god" is the real "god" and not some demiurge -- a subordinate god who has taken over the earth?  How would we know what God's actual attributes are?  That this same demiurge told us so?

You see the problem here.  Human nature creates explanations to fill in the gaps of understanding. We mythologize historical figures to make them heros -- more than they really were.  We create an image of god in the place of what was a real person, perhaps.

Take Jesus Christ.  Another hypothesis: he was a real person who may have taught that he was the Son of God.  Again, not something I can ever prove -- but I think it's a good working hypothesis.

What on earth did Jesus mean?  What if Jesus, being somehow taught by "wise men from the east", came to a realization that God was not a being "out there", but as many Zoroastrians, Taoists, and Hindus believe, is a real presence within us all?  Jesus did live, after all, in a town that likely was a way station along the Silk Road of his time, where such travelers would have been common.

What if the real teaching Jesus taught was that (1) God is far more real and present than our idolatrous image of god in scripture can ever be, and (2) that mankind indeed shares a common heritage with god?

What if the real teaching from Joseph Smith is (1) God of the creeds -- that of an omnipotent, omnibenevolent, omniscient, and omnipresent being -- is a logical impossibility and an abomination, and those who profess such nonsense are indeed corrupted by a false idea of god, and (2) Mankind indeed shares a common heritage with god?

I note that Jesus condemned Pharisees in the way they had created in the Law something that wasn't there -- the rabbinical/Talmudic interpretation of the Torah was so expanded, distorted, and changed from the original message of godly love that it became an idol to worship.  The rabbis had created a law -- and a god -- in their own idolatrous image.

I note how Mormon culture, cultivated by our idolatrous worship of leaders, has created a culture of obedience to every word uttered by the anointed general authorities.  We worship an idol -- and call that idol Christ.

This leads me to realize, that not only "in the beginning" did man create god, but even today, we continue to create god in our own hateful, despotic image.

Yet in spite of this, I see hope.  Deeply spiritual hope.  Woven in our scriptures and narrative are principles that can transform our dialog and remove the sin of idolatry from us.


While I no longer believe in the God of creedal Christianity, that of an omnipotent, omniscient, omnipresent being who exists outside of being -- to me it this being is a logical impossibility and a monster in the presence of random evil.  I have come to know, personally, a god within me, who weeps with me, and listens to me as I struggle through this existence.  And I have seen how this same presence is expressed when we are exalted humans -- able to love and serve one another here, now, in this life, in love.

And when I embrace this god, i start to realize that my image transforms, god creates me in his or her own image, and as i peer into the eyes and soul of my brothers and sisters, i see the very image -- the face -- of god.
Posted by Wayfaring Fool at 8:09 AM