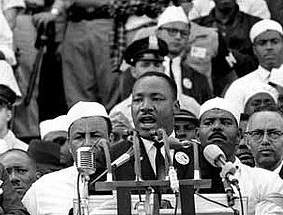 I am sitting in Brussels, Belgium, unable to attend the events commemorating the fiftieth anniversary of the March on Washington.  My wife and I had planned on going to the interfaith worship service that traditionally kicks off the event, but business responsibilities have taken me to another place.

Twenty years ago, I had the distinct privilege of co-chairing the organizing committee for the interfaith worship service for the thirtieth anniversary commemoration.  We struggled to find the right keynote speaker, and landed on having Andrew Young and Eleanor Holmes Norton as the speakers for it.

It was a very hot day.  Delegate Norton was struggling to find her notes for speaking, and I tried to help, saying something stupid like, "Just speak from your heart."  She eventually found her notes and spoke them from her heart.  A noisy disturbance almost derailed the service at one point, and as I stepped down from the podium at the Sylvan theater to try to calm things down, Andrew Young accompanied me, and with grace, dignity and power I have seldom seen before, this former deputy of Martin Luther King, former Ambassador to the United Nations, and mayor of Atlanta immediately calmed the group that was making the ruckus.

I went into the role of co-chairing the event thinking that I could change the world.  What I learned from Andrew Young that day is that the change of the world happens at an individual level, as he lovingly calmed down a relatively minor disturbance and an obscure event.

No, I don't remember at all what was said that day, but I remember being arm-in-arm with my brothers and sisters singing, "We shall overcome".

So, yes, I will miss this today.

I often reflect on what Dr. King said fifty years ago today, how he said it, and what happened.  In listening to his speech, the first part of it was elegant and erudite.  A promissory note not paid, language that effectively expressed the evils of racial segregation and then-current public policy.  It was a masterful speech, but it wasn't resonating.  At one point, Dr. King looked up, and abandoning his notes, began to express a dream for the world, based in the American dream.  Sure, the material came from many of his stump speeches -- perhaps everything he said from that point on was former material.

But this was no ordinary day.  This was the day when the words expressed before would come together into a marvellous symphony of spiritual connectedness.  It was no longer just about equality for the negro, but expressed a dream where a diverse people of can come together and be free at last.

Now, fifty years later, are we free at last?  Sure, laws have changed, such freedom doesn't happen just because laws change, but rather, there needs to be a mighty change of heart.  To say we are done with the progress made on that day is overlook the fact that we, as a country and world, are more divided than ever at a personal level.  In America, a very small minority of people with immense wealth and power are effectively dismantling the laws that put us on the track of equality and justice.  The difference between the wealthy 1% and the majority is greater than it ever has been.  Founding principles that assure freedom, such as the separation of church and state and the right of privacy are being dismantled in the very name of 'freedom'.

We have not overcome.

So today, this 28th of August, 2013, I will read again and listen to Dr. King's speech.  But I need to do more than that.  I cannot change the world, or even, perhaps, anyone else, but I need to see where my individual choices limit this dream.  I need to commit to making that dream a reality, if only in my individual dealings with others.  That, I can do.  That, I must do.

Thinking about the Endowment

Let me try a story here...a fable or myth that may have some bearing on why masonic symbols are in our temples.  I'm not concerned with history here -- instead, I'm doing a type of interpretive story-telling about what I consder to be deeply spiritual.   Let's say that a million years ago an enlightened alien, a "Great Architect", came to this planet, found a bunch of primitive beings -- early humans, and decided that there was potential for these "humans" to be just like she is. Given the distances and logistics of space travel, she knew she couldn't be here to help out these beings, but knowing that they eventually would need to know some really important things, she embedded into their genetic code a set of important programs: that people would need to have communities, that communities are best if they have some sort of bond, and that bonds are made through shared traditions.In time, the beings she left behind would create communities, but in so doing they sometimes created hostility between themselves and their neighbors The underlying programs were still working but other programs were distorting their ability to live harmoniously together.About 2500 years ago, the Great Architect happened to be travelling through the solar system, and noted all across the world, these beings were fighting with each other and needed an update of some of the programming. given that humans by then had populated the whole earth, she decided to spread a MESSAGE through a set of messengers: they were named "Cyrus", "Ezra", "Isaiah", "Daniel", but not just them -- also: Pythagoras, Confucius, Laotzu, Gautama...many were the names of these prophets. He told them to write down the MESSAGE. One of them even wrote about this -- his name was Nephi:"For behold, I shall speak unto the Jews and they shall write it; and I shall also speak unto the Nephites and they shall write it; and I shall also speak unto the other tribes of the house of Israel, which I have led away, and they shall write it; and I shall also speak unto all nations of the earth and they shall write it."In some parts of the world, the MESSAGE was called "THE WAY".In another five hundred years, some wise men from the eastern lands along the Silk Road came to Jerusalem and found a very intelligent young boy who had seemingly infinite potential. As the MESSAGE had been corrupted in Jerusalem, they taught him again the MESSAGE. Most of this boy's disciples later in life would distort the MESSAGE, but because the WAY -- the principle behind he MESSAGE -- resonates in everyone, the disciples revered the boy as a God, or the Son of God.    The boy learned that the WAY was really what the Jews thought of as the Power of God...and more specifically, the boy learned that to be one with that power is to be god in very act and deed.  He told his followers that to authentically "be" is to be the "I AM".  He quoted the scriptures, speaking to all, "Ye are Gods, and all of you are children of the Most High".  When his disciples tried to get him to show them "The Father", he told them that this authenticity of being -- the I AM -- is the very father -- "If ye have seen me, ye have seen the Father".  He prayed that each of his disciples might be one with the WAY and each other, in the same way that Jesus was One with the Father.  His enlightened principle was "[the] I AM (that is the authenticity of being) [is] the WAY, the TRUTH, and the LIFE -- laying out in the simplest terms the MESSAGE.