The Kingdom of God is Within 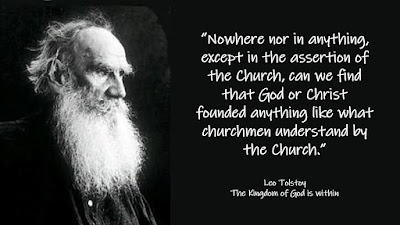 Late in his life, Leo Tolstoy became reconverted to the words and gospel of Jesus Christ, deeply realizing that divinity is not found in the institutions of the Church, but rather, within us as we realize the universal love of God throughout all creation.

To the end of his life in 1910, he became the intellectual force behind non-violence in the face of evil. His last writings were a set of letters between him and Mohandas K Gandhi, deeply influencing the latter.

We live in the midst of Empire. In our fears, we draw toward authoritarianism to protect us from our perceived enemies. We have become "King-men", seeking powerful men to rule us in both religion and state. We justify our choice to be subject to prophets and presidents because they protect us from evil if we but merely obey.

And we become the evil we have feared.

This begs a question: what kind of "Church" did Jesus actually organize?


Jesus Christ and the early church had nothing to do with any of the above.  In fact, the early church members were Jews, their religion was Judaism, and their worship was entirely Jewish rites.  In time, owing to the near impossibility of converting non-Jewish males to Christianity by way of circumcision and kosher law, virtually all Jewish law got set aside.

In fact, the first Christians were not so named: they were "followers of the Way", and their movement was called, "the Way." (Acts 9:2) And, the Way they sought to practice was unconditional love for all:


So, the best way that the "restored church" resembles the original church of Jesus Christ was that within the space of the first 189 or so years, there were many transformations of structure and belief, to the point that by year 200, the church was virtually unrecognizable from the original, informal, inclusive faith of the Followers of the Way.

The institutes of religion had taken over. History repeats itself, and indeed, whenever I am asked if I have faith and a testimony in the "restoration", I can say with confidence, "absolutely."  What was a mess 2000 years ago has become a mess today.

From the very moment Jesus began his ministry, he declared that god had anointed humanity to "preach the gospel to the poor; he hath sent me to heal the brokenhearted, to preach deliverance to the captives, and recovering of sight to the blind, to set at liberty them that are bruised." (Luke 4:18).  Jesus was excommunicated on the spot, because in quoting Isaiah 61:1 -- a verse understood to be about the eventual Jewish Anointed One -- A King -- he was offending their desire to have a king rule over them, to fix their problems.

Jesus fulfilled his mission by speaking truth to power.  His condemnation of church leaders of his day was far beyond the kind of criticisms today that get so many of us in the borderlands into Church Discipline.  If we dare speak up to heal the brokenhearted, deliverance to the captives, to heal the sight of those blinded by correlated doctrines, or to set a liberty those who have been subject to clerical abuse--if we do any of these in a way that sullies the "good name of the church", we will be excommunicated exactly like Jesus was.

This aspect of "come, follow me" isn't exactly what the Brethren have in mind when they use Jesus' words. And for a number of good reasons, perhaps we ought to be prudent not to follow Jesus' words in Matthew 23.

No, I think the reality is that the followers of the Way, Jesus' earliest disciples, had quickly come to a realization that Jesus' kingdom was not of this world, and that fighting against the powers that be was not in their best interest.  Even Jesus warned his disciples that the Church leaders of his day "sat in Moses' seat".   He said, "All therefore whatsoever they bid you observe, that observe and do; but do not ye after their works: for they say, and do not." (Matthew 23:3)

The disciples of Christ lived in their church communities. They went to their Jewish Synagogues. They did their Jewish rituals. But most importantly, their inner-life, their faith, was independent of the institution.  They expressed no violence toward their institution, but rather, they sought to engage in love wherever they were.

That was the difference.

I personally find, sometimes, a complete lack of love in many of the discourses we hear in our church.  A recent talk on the Atonement in general conference makes no mention of love, yet Love was all Jesus talked about when he explained his Atonement.

He said, "By THIS shall all know that ye are my disciples, if ye have love, one for another."

Jesus placed no conditions on that love.  Does the failure of our church leaders to implement loving policies mean that we should not love them?  Should we be contemptuous of them?

"To the kind, I am kind,
To the unkind, I am also kind,
For there is virtue in kindness.

If I feel called to the Kingdom of God, if I feel drawn to come, follow Christ, then I feel compelled to do the inner-work necessary to find that Kingdom within me. But not just within me, but also, within you, within our church, and within all that is.

The true and living Church of Jesus Christ, the Kingdom of God on the Earth, is not found in institutional authority, but rather, in the mighty change of heart that draws us together in love for all.

And Love--Godly, unconditional love--is the transforming power that changes hearts.

Love is the key to the kingdom of God.
Posted by Wayfaring Fool at 9:27 AM 2 comments