In Greek, the word for faith and belief is the same: πίστις / pistis.  In English, however, belief includes knowledge as the extreme of justified true belief, and our LDS testimonies confess that "We KNOW", not that we believe or we "have faith".  Greek never equates pistis as knowledge ("gnosis").  Pistis implies more of a trust or hope that something is true.

The study of how we believe things is called "epistemology", coming directly from pistis.  Although we often impute epistemology as the study of "knowledge", it is most appropriately focused on how we come to have faith in something.

Remarkably, our LDS scriptures give us a study in how we move from unbelief, doubt, and uncertainty, to a specific faith and belief in things.  Eugene England proposed that Alma 32 constituted and "epistemic" -- method of sorting out faith/belief -- although in all my readings of England, I don't think he spelled it out explicitly.

Alma provides that reconstructive methodology in his epistemic, which in my impression is quite simply this:

Alma 32:21: "Faith is not to have a perfect knowledge of things; therefore if ye have faith ye hope for things which are not seen, which are true."

As I see it, faith lives within the continuum between certain belief and disbelief -- it is not the assertion that "I KNOW", but rather something less than certainty, yet still "hopeful" that the thing in which we have faith is "true" in some material way.

Alma goes further, to suggest that faith does not require belief, and suggests that faith doesn't start with belief at all, if we can but "exercise a particle of faith, yea, even if ye can do no more than desire to believe..." (v27).  He then suggests having a willingness to try something out to see if it is true, and not to "cast it out by your unbelief" (v28).

The outcome of the test is not always that the seed grows.  He flatly states that if something doesn't grow -- doesn't edify, then "behold it is not good, therefore it is cast away".  Belief in something that doesn't grow or isn't true isn't faith at all, but rather something else.  Faith needs to be in something that edifies, that grows, and brings forth good things.

Once our faith has proven to bring forth fruit on the specific test of *a seed*, some may think that the work is done.  If I get a good feeling about the Book of Mormon, then, inductively, the Book is absolutely true in all of its dimensions, literally historical, and the person that brought it forth must be a prophet of god.

Alma rejects this inductive reasoning.  He says, "Your knowledge is perfect *in that thing, and your faith is dormant...and now behold, after ye have tasted this light is your knowledge perfect?  Behold, I say unto you, Nay; neither must ye lay aside your faith, for ye have only exercised your faith to plant the seed that ye might try the experiment to know if the seed was good."

He finally suggests that the epistemic construction of faith and belief is a continual process, to be embarked throughout life, to nourish both our faith and our knowledge.

Alma's epistemic is a basic outline of coming to a type of truth-value of specific things: planting a seed in one's heart (emotions) and seeing if it "grows" creates a knowledge not that the thing itself is objectively true, but rather normatively and valuatively true for me.  I can "know" that something, like the Book of Mormon uplifts me, inspires me, and causes me to do good, because I can experience such things.  But to imply that a given thing is "objectively true" -- as in a literal and true history -- would be an inductive fallacy.  I don't think, however, most LDS realize this inductive fallacy, and from my reading of Alma's requirement that "you're not done" is a rejection of induction. 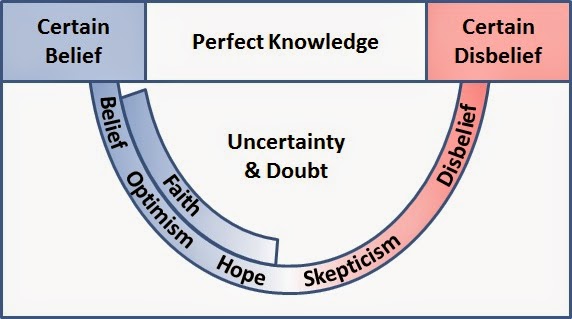 Visually, I have tried to represent the spectrum of certainty ("perfect knowledge" as being more than just a binary something is either true or false.  As I see it, there is a realm of "perfect knowledge" which may be a very small set of things.  For everything in between, we have beliefs, optimistic desires, hope for which we want something to be true.  Belief, at least in English, doesn't clearly distinguish itself from "certain belief" or "justified true belief", therefore the term is not a useful designation for "faith" but the scriptures cannot avoid this coming from a single word in the greek.

There is a negative side of this spectrum, the area of skepticism and unbelief/disbelief.  These two words seem a little different in nuance: unbelief seems to be softer, whereas disbelief is a rejection of belief, and is closer in the spectrum to "certain disbelief".  Skepticism, properly defined, should reside at the mid-point in the spectrum.

Doubt is not on the spectrum, it IS the spectrum.  The difference between certainty and uncertainty is the extent to which we doubt.  The scriptures often juxtapose "doubt" in contrast to "faith"/"belief", creating a confusion that there necessary doubt (epistemic humility), and there is disbelieving doubt, which betrays less than epistemic humility -- Given the broad spectrum of doubt, it's all in the context -- I might politely say "I doubt that" when I mean, inside, "I disbelieve that".  Such is the fungible nature of the English language.

In creating this spectrum of faith, uncertainty, and doubt, the one thing that concerns me is that "Faith" is spectral in and of itself.  When Jesus chastised Peter for faltering AFTER walking on water, he said, "O thou of little faith, wherefore didst thou doubt." (Matthew 14:31).  Indeed, the better translation here of "doubt" was to waver -- Peter neglected to continue to "trust" the Lord in his "walking on water" experience.  Taken as a metaphor of how we walk in Christ, trusting Him, it is a powerful statement.  Taken out of context that doubt is the antithesis of faith is not supported by the scripture at all.

Why Priesthood at All?

CAN any one, without the Priesthood, pray and have his prayers answered? Or receive the Holy Ghost, with its gifts and manifestations?

May one have revelations and visions of heavenly beings, without the Priesthood?

Joseph Smith and Oliver Cowdery did so. In May, 1829, John the Baptist appeared to them, and that was before either of them had been ordained.   It was John, in fact, who conferred the Priesthood upon them. This function of having visions, of course, was exceptional in their case.

If, then, one may pray, may have his prayers answered, may have the Holy Ghost bestowed upon him, and may exercise many of its gifts, without holding any Priesthood, what is the place of Priesthood on the earth?

Chiefly Priesthood functions in connection with organization. That is, the greatest need of Priesthood is where there is a service to be performd to others besides ourselves.

Whenever you do anything for, or in behalf of, someone else, you must have the right to do so. If you are to sell property belonging to another, you must have his permission. If you wish to admit an alien to citizenship in our government, you cannot act without having been commissioned to do so by the proper authority.

Now, a religious organization, or the Church, is in the last analysis a matter of service. You baptize someone, or you confirm him, or you administer to him in case of sickness, or
you give him the Sacrament or the Priesthood, or you preach the Gospel to him — what is this but performing a service?

Now, when it comes to earthly power to perform a definite service, we call it the power of attorney in the case of acting legally for someone else, or the court and the judge where it is
a question of acting for the government.

But in the Church of Christ this authority to act for others is known as Priesthood.